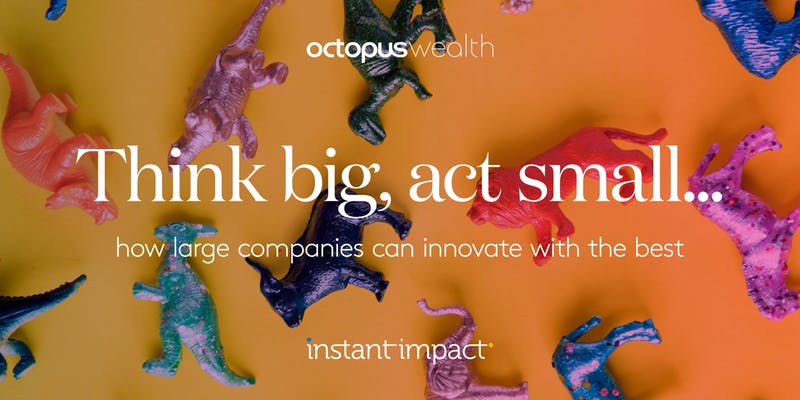 Instant Impact had the pleasure of running this event alongside Octopus Wealth. The event took an informal approach, with 2 keynote speakers and much discussion on innovation and how to succeed in this arena.

Sam kicked off the evening, discussing how companies can innovate at speed? And how Octopus have done it?

Sam has worked on many of Octopus’s ventures. He began in Octopus Investments, later moving to Octopus Labs where he oversaw the development of two key products, Octopus Choice and Octopus Cash. As well as Octopus’s many successful ventures, Sam mentioned the projects that haven’t succeeded. Sam believes we need to accept failure and says, “losing the fear of failure is a crucial part of succeeding in the future” and that “to work on things that don’t work, isn’t a bad thing”.

The 5 Key Steps for ‘innovating at speed’:

‘Analysis paralysis’ - over analysis can prevent people taking the leap of faith needed. Speed is crucial for a successful venture. Get out there, test and adapt.

Make sure you are aligned with your values and provide good incentive structures for employees.

This follows on from the concept of ‘governing at speed’, company design and structure must allow governance to happen quickly. An innovation culture begins with the employees. Sam states that you must hire people that are comfortable with an unstructured environment and you should “give them the freedom they need to do what they do best”.

Sam touches on the importance of not cutting corners when it comes to hiring, highlighting the importance of an on-boarding strategy and the need to find a good recruitment partner who understand the company’s culture.

You don’t just need a talented workforce on paper, they must be practical. Don’t underestimate the importance of skills in data and technology in driving innovation. Sam commented, “We want to make sure our workforce has a digitally-led skill set to match the digitally-led innovation of our business”.

Next Sadiq Damani, the CEO of Theodo UK spoke about ‘How two corporates successfully innovated at speed?’

Sadiq started working for Theodo UK just a few months after the launch, when the team was only 6 people, now 3 years on they have a team of 40+. Theodo specialise in Lean-driven innovation within a digital context, covering Lean IT, DevOps, Agility, and Digital Transformation. Sadiq has been involved in helping Start-Ups launch their first scalable platform, solve cost leaks for corporations, create revenue opportunities for established companies - all through a Digital Minimal Viable Product mindset, delivering in weeks rather than quarters and years.

Sadiq used the examples of Veygo, by Admiral Insurance and Trade Lock to show how corporate companies can successfully innovate quickly. He focused on the importance of agility.

Agility and speed are often quoted as crucial ingredients for innovation.  Sadiq believes it is important to define what agility means to your company and how it links to what you want to achieve as a result of innovation.

To be agile and move quickly you must strip back your business case and test your hypothesis as soon as possible. Sadiq focuses on the belief that it is okay to pivot from your original idea and that key decision makers must believe this too.

Linking to this, company structure should be genuinely autonomous to improve agility.  Backing up what Sam said, it is important decision makers are close to the day to day innovation level, without impinging it through over management.

Don’t secure your first idea, fluidity upfront is important – get out there and test what works before fixing anything in stone.

Sadiq metaphorized this concept by using the example of a ring. He said that most corporate companies will think “let’s get the stone onto the ring to see what it looks like”. Whereas clever innovators will hypothesise about what the stone might look like on the metal, without attaching it upfront, to avoid launching a venture too early.

The evening was insightful and thought-provoking, with questions from the audience steering the discussion to topics such as ‘how to deal with failure internally’ and ‘the importance of honesty and transparency with your clients’.

Instant Impact are looking forward to holding more events with Octopus Wealth soon and we look forward to seeing more and more of you there.

Thank you to Sam, the whole Octopus Wealth team and Sadiq for a great evening!

To find out more about Octopus Wealth: https://octopuswealth.com/

To find out more about Theodo UK: https://www.theodo.co.uk/